With the end of 2018 in sight, it is time to reflect on the action taken and decisions made by the First Committee of the 73rdUN General Assembly.  In light of events that transpired throughout 2018, the topic of nuclear disarmament and non-proliferation remains at the forefront of the First Committee agenda.

Setting the tone with opening remarks, the state representatives presented their respective stance on key points of contention in the existing disarmament machinery and regime. Although never thought to be overly enthusiastic for the cause of nuclear disarmament and non-proliferation, the nuclear weapon states rhetoric and positioning is a surprise to anyone on first exposure. 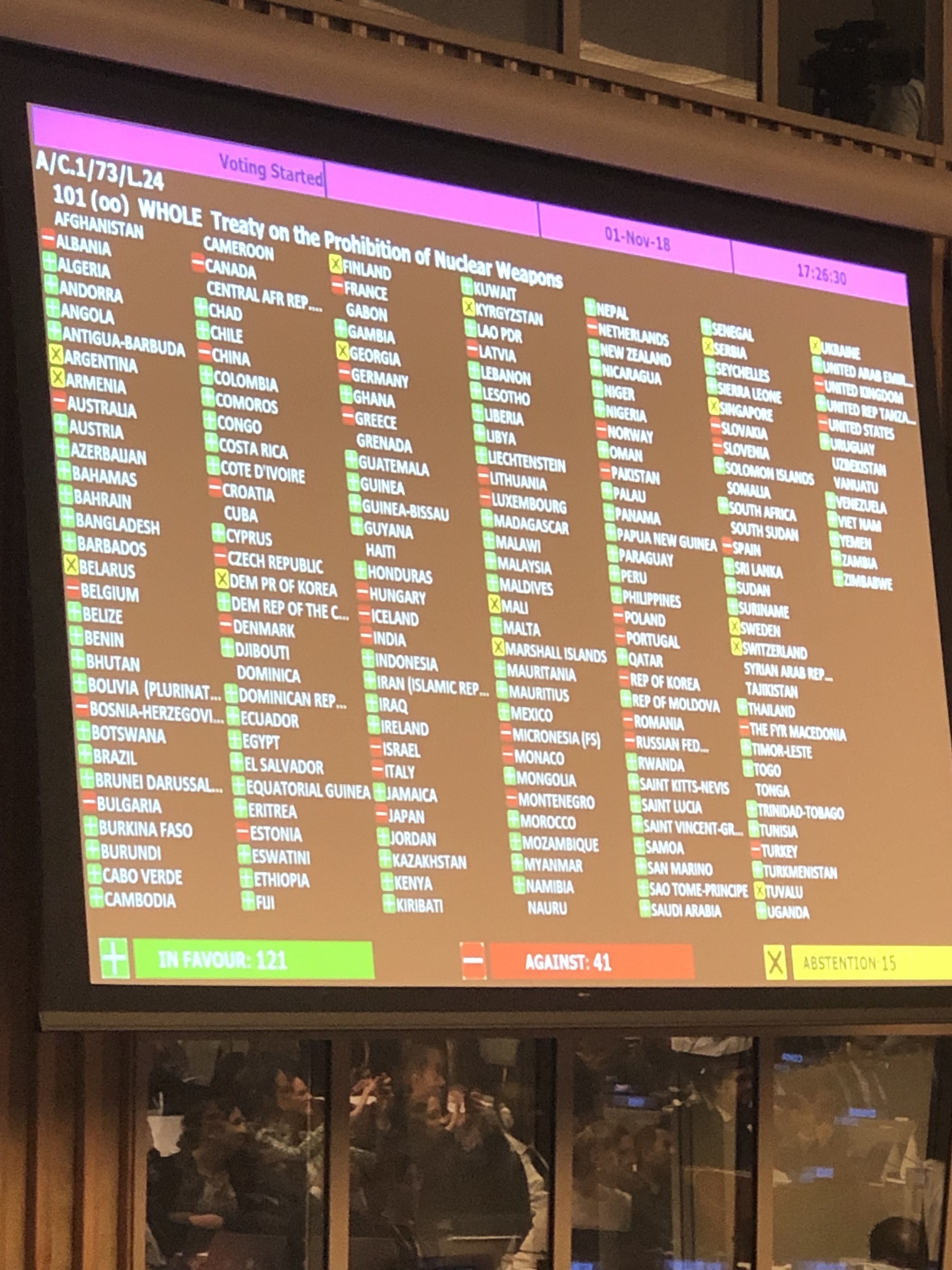 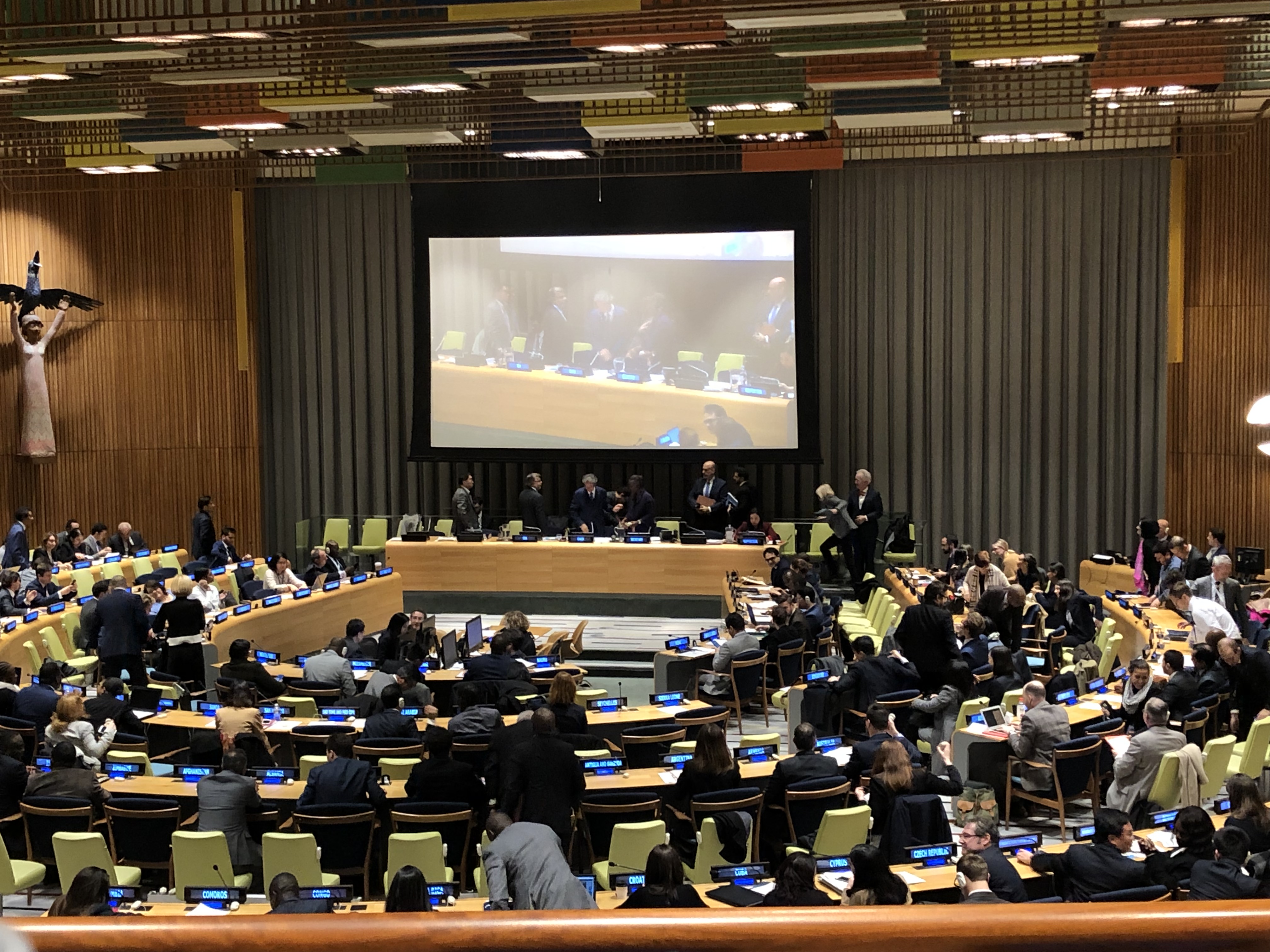 Aside from unabashed finger pointing at one another, such as constant “right to reply” segments being exercised by the Russian and U.S representatives to sneak in a quick jab, their disregard for multilateral efforts to advance the cause of nuclear disarmament is astonishing.  This tone, although slightly varied between certain sects of the nuclear weapon club (France, UK and US usually in conjunction and Russia alongside China), continued into the action phase of First Committee, with several tabled resolutions resoundingly denounced.

A single subject within the broader disarmament framework that garnered particular attention was the year-old Treaty on the Prohibition of Nuclear Weapons (TPNW).  Since its inception, nuclear weapon states have been at odds with the treaty, with the UK representative constantly referencing it as a “silver bullet attempt that does not actually work”.  Most of these states believe the treaty does not address the current security climate (inferring the validity of nuclear deterrence) as well as undermining the “pillar” of disarmament that is the Non-Proliferation Regime (NPT). Additionally, the TPNW is accused of being exclusive, ostracizing nations reliant or in possession of nuclear weapons, although they are permitted to sign and ratify the treaty through a “join and destroy” procedure. The TPNW offers the opportunity for these nations to commit themselves to a disarmament plan for their respective arsenals unlike the language present in the current disarmament regime.

Unlike the major nuclear powers, several nations rose to the defense of the TPNW and multilateral disarmament efforts of late. From South Africa to New Zealand, these states praised the creation of the treaty in 2017 and are spurning others to sign and ratify in order to bring it into force.

There were also several side events held in relation to the TPNW, most notably the launch of the 2018 Nuclear Weapons Ban Monitor, the first report of a newly established watchdog for the treaty. The report outlined the positive reception the TPNW receives by most nations around the world. Under current projections, the TPNW is on course to be the fastest humanitarian disarmament treaty to be ratified into force, with a projected entry date in late 2019.

In addition to discussion of the nuclear cluster (and subsequently the TPNW) alongside other WMDs such as chemical and biological weaponry, ongoing changes in the geopolitical climate greatly shaped discussions amongst diplomas, such as the shock announcement by the US administration to pull out of the Intermediate-range Nuclear Forces Treaty (INF). As a result of what transpired, the Russian delegation submitted a draft resolution pertaining to the US decision, which was circulated on October 24, 2018 with the date for submission having come a week earlier (October 18).

In the following exchanges over the course of two sessions the Russian representatives attempted to defend the late submission due to unforeseen developments, but the US and allied states sought to point out that the issue was state to state and should therefore be handled by the UN Security Council and not First Committee in addition to the submission being very late. The decision to accept or reject the resolution was eventually put to a vote, with the final result being 31 in favor, 55 against and 54 abstentions, which resulted in the resolution being dismissed.

As a result of the aforementioned proceedings and constant bickering between a select few states the First Committee schedule was predicted to fall behind its target significantly.  To his credit, Chairman Ion Jinga of Romania was able to maintain order and effectively execute all resolution votes, with all being subsequently passed by the committee.

It was a privilege to sit in on the UN First Committee during the 73rdGeneral Assembly and learn about the operative functions and responsibility the subcommittees hold and the integral role they play in advancing multilateral disarmament objectives.  In a negative light, the bureaucracy and monotonous methods employed by a select few powerful states stagnated the potential of First Committee.  On the contrast, despite such setbacks multilateral disarmament continues to advance as already instated treaties are strengthened and others are approaching entry into force (TPNW and CTBT). Through increased cooperation and a stronger desire by the weapon states to partake in the disarmament process the disarmament framework will be strengthened further and lead to more productive First Committee sessions in the future.