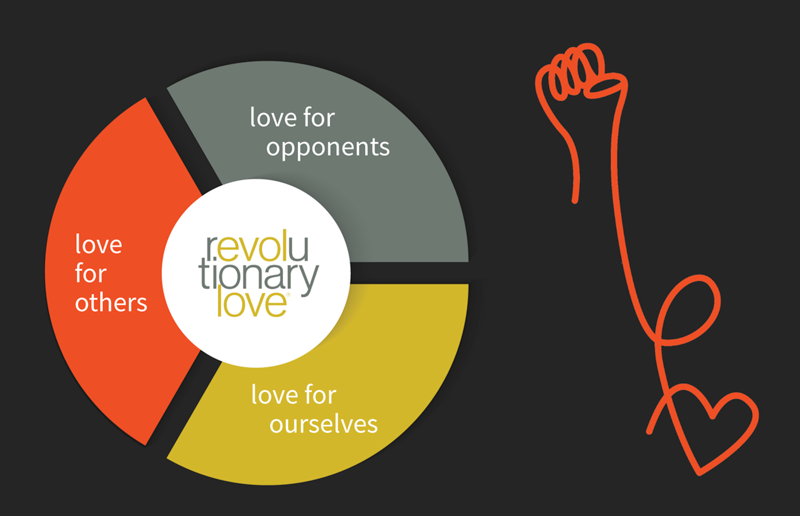 The Hibakusha Rebellion and Revolutionary Love

Revolutionary Love is the choice to labor for others, our opponents, and ourselves.

Revolutionary honesty is doing our best to say the truth, the whole truth and nothing but the truth regardless of the consequences.

The Hibakusha Rebellion aligns itself with two vital coalitions: Extinction Rebellion and the Revolutionary Love Project.

Our collective goal is a healthy planet that works for everyone. As a member of the Hibakusha Rebellion, you are committed to questioning any person, word or deed that appears to be selfish and opposed to the goal. If someone says something racist, classist, misogynist, cruel or thoughtless, you question it.

When you question, you are not challenging. You are exploring the “other” in a way that seeks mutual understanding, truth, and a deeper, better relationship. You are not trying to win. You are trying to overcome the dissonance between you and the person involved. Maybe your interpretation of what was said is wrong. You are open to that. But you do not let selfish statements stand. You want to know where those statements come from.

The more we do this, the more the issues of violence, war, weapons and other manifestations of selfishness will rise into human consciousness. You will have an effect on the people around you, and when we generate enough support and funds to take our movement to the general public through the media, the people you talk to are far more likely to understand and come over to the revolutionary-love point of view.

To learn more about revolutionary love, watch this Ted Talk by Valerie Kaur.