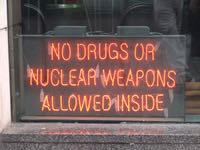 If you haven’t read my opening statement, please do. This piece will make more sense that way. But assuming you find that to be too much trouble, let me summarize. In my opening statement I promised to: 1) take all (or most) of the world’s problems and explain exactly how winners are screwing up a perfectly manageable situation, and 2) help you graduate from being a winner to being a decent human being enhancing the chances of human survival on Planet Earth.

So why is winning so evil? Let’s start right at the top of the enemies-of-humanity hierarchy. Nuclear weapons are dangerous, expensive and not a good return on investment (from the taxpayer point of view, as opposed to the nuclear industry point of view). According to Global Zero, nukes cost the human family about $100 billion per year (that’s a trillion dollars every ten years). With that much money, we could end hunger, which is what we would do if winners weren’t in charge, but I’m sliding into a future topic.

Even a limited nuclear war would instantly end civilization as we know it. A war involving hundreds of hydrogen bombs could exterminate human life. If you don’t believe me, check out www.nucleardarkness.org. And yet, the US and Russia still have over 2,000 warheads on hair trigger alert.

Nuclear weapons are an imminent threat to our collective survival, but unlike the other threats I’ll address in this series, we could easily end it. Nine countries could free us from this threat in a week or two if they wanted to. Other problems, like global warming and the gap between rich and poor, will be difficult, even with everyone doing their best. The nuclear threat is the easiest global problem we face.

Disarmament ambassadors, especially those representing the nuclear-weapon states, never tire of telling us how extremely complex and difficult this problem is, but there is nothing the slightest bit complex about disabling the weapons. They can be rendered permanently harmless in a few minutes, to be safely dismantled and disposed of at leisure. End of threat.

The complexity derives entirely from winners. The highly competitive winners in charge of nuclear weapons are more interested in winning than in liberating us from that threat. They all claim that they are forced to risk making Earth uninhabitable for human beings because of each other, that is, winners have to deter their rival winners. See what I mean? Winners are the problem.

Are nuclear weapons required to make this planet a safe, comfortable place for all of us? No, they are required by a tiny handful of winners to deter other winners, all of whom are seeking to establish or maintain dominance over certain territories, resources and much larger groups of people. This competition for dominance prevents problem solving.

Ever since the first atomic bombs exploded over Hiroshima and Nagasaki, wise men and women have begged the political and military leaders in control of nuclear weapons to sit down, negotiate, and solve the problem of world-destroying weapons. The leaders have promised repeatedly to do so, most notably in Article VI of the Nuclear Non-Proliferation Treaty (NPT). The International Court of Justice found unanimously in 1996 that the nuclear-weapon states are legally obligated to negotiate in good faith to achieve total nuclear disarmament. Given this legal obligation, have the nuclear-weapon states gathered somewhere and given it the good ole college try only to discover that the problem is too complex?

No. In seventy years, the leaders of nuclear-weapon states have never spent one second sitting around a table talking to each other about how to get rid of nuclear weapons. In fact, my data-free guess is that most have never spent one second seriously thinking about it. The last thing they want to do is solve this problem. They are winners. What they want is to use nuclear weapons to win something (a negotiation, a power struggle, a big budget, an obscene profit). Some want to win so badly, they would rather kill us all than lose.

This situation demonstrates clearly why winners are enemies of humanity. The difference between a winner and a decent human being is the willingness to sit down and talk with an enemy, rival, opponent, or someone with whom one has a problem, especially a problem like mutually assured destruction. Decent human beings are willing to pursue mutual safety and satisfaction through dialogue and creative problem solving. Winners are not.

The case of nuclear weapons brings this critical difference into high relief. If the nuclear-weapon states wanted to eliminate nuclear weapons, they could easily do so. If they all sat down together to discuss how to institute an effective inspection and verification system, they could get it done in a few days. They know this perfectly well, which is precisely why they’ve never tried. The problem is so totally easy to solve, they’re forced to refuse to try, even though they’re legally obligated to do so. They refuse to sit down to solve the problem because they’re determined to keep their nuclear weapons. They’re determined to keep using fear and nuclear weapons to suck money out of the pockets of taxpayers, so they continue to act like enemies and threaten us all with sudden death.

So are the leaders who refuse to sit down and negotiate an end to nuclear weapons all evil people? Heavens no! Decent human beings are careful to distinguish between people and the problems they cause. We have to give people space in which to change. Just because some leader is a winner today doesn’t mean he or she can’t be a decent human being tomorrow. Decent human beings have to be nice to everyone because we know that everyone is fighting battles we know nothing about.

For example, I am profoundly disappointed in President Obama for winning the Nobel Peace Prize, then tripling the US nuclear weapons budget. However, it might be that Obama understands in a way I cannot that, were he to launch a sincere effort to negotiate an end to nuclear weapons, he would soon be as dead as President Kennedy. Bad things do happen to folks who stand up against winners. In fact, it might be that I’m completely wrong about nuclear weapons. Maybe we do need them for some reason I don’t see. This uncertainty principle is why decent human beings must always be ready to sit down with those who see things differently. But this is what winners refuse to do. They don’t talk. They win (or lose).

Unfortunately, winners have veto power over peace. It takes all sides to discuss and resolve a problem. It only takes one winner with a nuclear weapon to make that impossible. So does the veto power of winners mean peace is impossible? No, but it does mean that President Obama and all decent human beings have to be prepared to die to bring the evil of winning to light. I’m afraid the only way we can stop the winners is by doing some deliberate, transparent, and painful losing. If Obama were willing to risk death or even a Republican victory in the next election, he might be able to get us to the brink of a nuclear-weapon-free world before they get him.

Or, maybe he could bring the whole threatening situation into the open. He could use his bully pulpit to confide in the American people, telling them what he would like to do about nuclear weapons and what he thinks might happen to him if he tries, thus initiating a massive public debate about nuclear weapons that would make killing him difficult, dangerous and too late. This discussion would be happening already if our leaders were decent human beings. Sadly, we are still led by winners who eschew open discussion in favor of secret machinations.

More about global warming and interesting times next week.