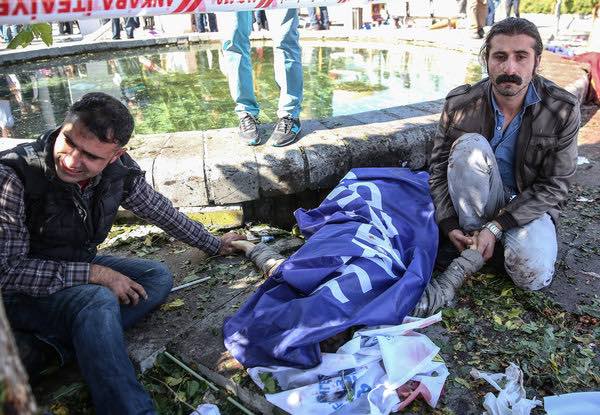 Last week I said I would write this time about poverty and violence, but just as I took laptop in hand, a podcast assaulted me with an appalling report about bombings in Turkey that took over 100 lives. That report caused me to focus more narrowly and more angrily on the problem of violence.

I still have no idea who killed whom in Turkey. I’m quite sure I haven’t heard the real story. I’m also quite sure that whoever sent suicide bombers into that crowd (if that’s really what happened), had, from their own point of view, excellent reasons for doing so. Certainly the guys who blew themselves up believed they were doing it for a good cause.

Was it the current government holding on to power, for the good of the nation? Was it the Kurds fighting for freedom and democracy? Was it the Islamic State seeking to make the world a better place by killing off enemies of the One True Islam? Whomever it was, and whatever their justification, the minute they used violence to achieve their goal, they lost their status as decent human beings.

So far, since I’m talking about terrorism and the Middle East, you’re probably still with me, but how far can we go together on this pacifist path?

What about President Obama? Every Tuesday (I’ve heard) he updates the drone kill list, giving permission for some kid with a joystick to fly an unmanned aircraft over a distant country where he blasts a house or car to smithereens hoping it contains the targeted bad guys and not too many innocent bystanders. Of course, both Obama and the kid are doing this to keep Americans safe from the terrorists, so is this an acceptable use of violence?

What about the US, NATO or Saudi Arabia bombing Afghanistan, Iraq, Libya, Yemen and Syria, killing hundreds of thousands, displacing millions, and turning nation after nation into failed states? All of this is to kill guys who cut off people’s heads and would cut yours off if they got a chance, right? So is this kind of violence justified?

What about Palestinians stabbing Jewish settlers or firing rockets into Israel? Israel is obviously a rogue nation run by neocon Zionists keeping Palestinians on starvation rations in the world’s largest jail where they are periodically mowed down by the thousands. Are Palestinians justified in using violence to fight for their freedom? Are Israelis justified in killing Palestinians to defend Israelis? Has all this killing of evil people made life better for Israelis or Palestinians?

Or what about a duly appointed policeman who orders someone to freeze or get down on the ground or put out a cigarette and that person deliberately disobeys the order, giving said policeman some impolite verbal resistance. Is that policeman justified in using a Taser, gun or other violence on someone who is clearly a rebel and fails to understand who must be obeyed for the good of society?

Or what about a young black male who has done nothing wrong but is stopped by a bad cop. He knows from his own experience and the experience of dozens of others right around him that he is about to get a beating and end up dead or in jail. He has done nothing wrong and has every reason to believe the cop might kill him. If this innocent young black male can grab the bad cop’s gun, shoot him and get away, would he be justified in doing that?

Or what about a black, transgender woman walking down a dark alley where she meets four drunk, white rednecks who pick up sticks and start speculating hilariously about her genitals. Should she have a semi-automatic in her purse that she can turn on those rednecks to protect herself? If she does, would she be justified in killing them? Wouldn’t the world be a safer, nicer place without those guys?

Or, let’s say you wake up in the middle of the night and see a couple guys breaking into your home with signs on them that say, “We are here to rape your wife and kill your children.” If you had a gun, would you kill those guys?

Most people I know, many of them quite decent in many respects, are unwilling to give up violence. They don’t like violence, of course. They want to avoid it as much as possible, but they insist it’s sometimes necessary. To defend this position, they point to everything from Hitler to guys breaking in to kill children to the need to eat to the survival instinct in our DNA.

I, on the other hand, believe we have to reject group violence altogether to loosen its grip on our collective throat, and the bombings in Turkey compel me to explain why.

Let’s start with a definition of violence. For the purposes of this series about winners and decent human beings, violence starts when you win something without caring about the loser. If you hurt someone in any way, by word or deed, gun or money, legal or illegal, conscious or unconscious, you have “started it.” You have done something that can and often does lead to actions we all recognize instantly as violence, usually the inflicting of physical harm.

By “winning”, I’m not referring to rugby or checkers. Games are excellent devices for safely enjoying the thrill of victory and the agony of defeat. The losers willingly take part, with losing the price competitors pay for playing the game and sometimes winning.

And by rejecting group violence, I am not talking about guys who come into your house to rape your wife and kill your children. If someone breaks into your house, go ahead and shoot, see if I care. Individual criminals and the violence they perpetrate aren’t even in the same league with the class of winners and type of violence I’m urging you to reject.

The winners I’m talking about are people with power acting institutionally and in groups to compete with other institutions or groups. In service to organizational competition, they negotiate, legislate, lie to the media and drop bombs in ways that benefit themselves without knowing or caring what it does to others. I’m talking about people who take from or pollute the Earth without caring what they’re doing to the ecosystem or future generations. These mindless, group-based winners are an existential problem for all decent human beings. Their activities are making our lives miserable and our planet unlivable. We have to stop them, but how?

More importantly, winners are completely devoted to winning. They are not good losers. In fact, they have repeatedly demonstrated their willingness to kill us all and make our planet uninhabitable rather than lose. (Recent case in point: The lying executives of Exxon may well have sacrificed the entire human family to preserve their positions and profits.) Winners are armed and extremely dangerous; they must be handled with great care.

After decades of watching decent human beings win battle after battle (the New Deal, the Voting Rights Act, the Clean Air Act, the Americans with Disabilities Act, the Vietnam War, don’t-ask-don’t-tell, a black president, marriage equality) only to keep decisively losing the war, I have come to the conclusion that we can’t beat the winners. We can’t even compete with them. After all, competition is their specialty; decent human beings don’t stand a chance. In the winners’ game, nice guys finish last. Our only hope is to change the game, and the only change that will accomplish what we seek – a world run by and for decent human beings – is to drop out of the competition, drop out of the winning, refuse to take part in or cooperate in any way with any group killing, and reject, despise and disobey any leader who advocates or even accepts the use of group-on-group violence.

In the West, we have to make ourselves completely immune to the notion that North Koreans, Iranians, Venezuelans, Russians, Chinese, Muslims, immigrants, young black males, abortion doctors or anyone else should be killed. We reject killing by terrorists. We reject killing by drones, soldiers and states. We reject killing by good guys as well as by bad guys. We reject killing or any form of cruelty as an answer to any of our problems. We demand that all problems be solved through dialogue, negotiation, and the creative transcendence of conflict, with “solved” here meaning a solution enthusiastically embraced or at least willingly accepted by all stakeholders, from the most to the least powerful. Any solution that pleases any subgroup at the expense of any other is no solution, and we would rather die than accept or participate in that kind of solution. This is what it means to be a decent human being.

Because we can’t force winners to participate in conflict resolution processes, decent human beings need, at this stage, to live as separately as possible in our own decent human communities. We need to demonstrate that cooperative life without winning is fun, safe, comfortable and productive. We need to show that a commitment to universal wellbeing is actually better (in every possible sense of this term) than the competitive, adversarial lives we are forced to live today. We need to build communities and businesses that are economically and environmentally sustainable while being safe, caring and enjoyable. And we need to do all this without relying on winners or giving them our money. To the extent possible, we have to buy from, bank with, and bank on decent human beings.

If we can’t drop out of winner society and create our own better society, decent human beings have nothing to offer. We will merely be nice guys finishing last until the winners pull us all over the cliff. And, if we are willing to accept violent responses by any group toward any group for any reason whatsoever, we are not significantly different from the winners we are trying to educate and convert—except for being weaker and poorer.

For at least two millennia human society has been attempting to defeat evil through violence. After all these years of good and bad people killing each other, we live in a violent, unsustainable society governed by selfish, lying, cheating, stealing, murdering gangsters who are gradually ruining our planet while keeping their fingers on buttons that could exterminate our species in an afternoon. Seems to me decent human beings ought maybe try something different.