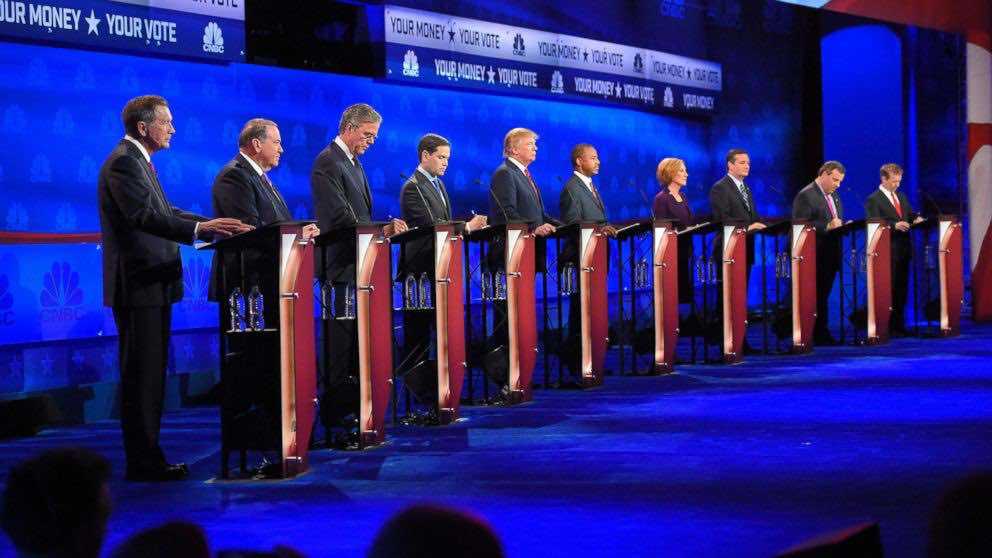 Watching the candidates for US president debate each other on TV, I’m struck by how fiercely they present themselves as winners. They are all so fantastically powerful. If we just elect them, they will force Mexico to build a wall between them and the US, they will put the Russians-Chinese-Muslims in their place, they will take money from the rich and give it to the poor, they will take this country back, put it on the right track, and get the economy growing again. They will do these things because they know that these are the right things to do, regardless of any idiots who don’t think so. The message is, “I’m a winner. Elect me and I will use my great powers of winning to win for you what you want.” The one thing they all have in common is, they are super-winners.

The problem with winners is, as I keep saying, they are always fighting to win, as opposed to solving problems. Decent human beings, I assert by definition, eschew winning in favor of solving problems. So what does this actually mean?

We all want to win and climb higher on our respective ladders because the higher we get, the more respect we get, the more money we get, the better we get treated, the more often we can get what we want, etc. When you’re at the top of any ladder, you get treated like a king. People open doors for you, carry your bags, give you stuff, and agree with whatever you say. Hence the saying, “It’s good to be king.”

Prior to 1945, this whole ladder-climbing thing made sense. The pursuit of power structured our society, ensuring that our leaders would be winners. All groups naturally want to be led by winners. After all, we want our family, clan, tribe, political party, company or nation to win against our rivals, so it’s good to have a strong, smart winner as our leader.

We (human beings, chimpanzees, wolves, even chickens) respect and obey our leaders because our success as a group depends on their strengths, skills, virtues, wisdom and luck. We believe our leaders are vital to our own success because, in winner society, the main method of solving problems is to have the leader solve it. He or she may consult his or her advisors (or legislature or board) or delegate down the chain or pray to God, but ultimately, he or she is responsible, makes a decision, and the group goes along. Most of us still consider this perfectly natural. We see no alternative. We see no need for an alternative. Most of us still don’t understand that our leadership needs reversed dramatically on August 6, 1945.

More accurately, ever since 1949 (when the Soviet Union got the bomb), the world has had no leader and no prospect of finding one. When the Soviet Union collapsed and became Russia, certain American winners thought the US could become leader of the world. They did their best to take over (they are still trying, actually), but they failed. By now it should be clear that the US, with all its fabulous military might, can’t even control Afghanistan or Iraq. How will American winners conquer the rebellious winners in Russia, China, India, Brazil, Venezuela, Ecuador, Iran, Germany, France, etc.? The human family is beginning to realize that the US can make a terrible mess of just about anywhere, but it will never, ever be boss of this planet. Nor will Russia nor China nor India nor the Rothschilds nor any banking cartel nor the Illuminati nor the New World Order. The world is never going to be controlled by a winner. There will be no king or emperor or shogun of the world.

That being the case, the winners’ method of solving problems (the leader decides) is unusable, impossible, can’t happen. No winner (person, political party, bank or country) is going to eliminate nuclear weapons. No winner is going to come along and make us all start using less fossil fuel. No winner is going to declare an end to our infinite-growth-based economy. No winner is going to make sure everyone on the planet has enough to eat, clean water to drink, healthcare, education and a decent job. No winner can do any of these things because we simply cannot solve our global problems through competition.

As a species, we face several urgent, life-or-death problems (nuclear weapons, CO2, methane, ocean acidification, weaning ourselves from oil,) but our biggest problem is the fact that our current problem-solving methods (elections, litigation, amassing fortunes, building empires, spying, lying and killing each other) are inappropriate and inadequate. As a result, our problems go unsolved, and we edge ever closer to self-extermination. The only way the human family can survive is to cooperate, that is, identify the problems, discuss them openly and honestly, and come up with solutions that work for all of us, including plants, animals, and the Earth itself. In other words, we need leaders who are decent human beings eschewing winning in favor of solving problems.

Let’s take some examples. Some people believe we should put less CO2 into the air and oceans, we should provide free education for all, health care should be controlled by insurance companies, abortions should be illegal, gay people should be cured, everyone should be Christian or Buddhist or Muslim except everyone in Israel should be Jewish, all corporations should have workers on their boards of directors, big banks should be bailed out, central banks should be eliminated—take your pick. And a lot of people disagree with all these ideas. Within our adversarial, winner-take-all system, the only way to do anything about any of these problems is for one side to win. Thus, huge amounts of money and energy are spent trying to get certain winners into political offices where they can help one group of winners at the expense of some other group. Unfortunately, no group ever has or ever will obtain enough power to solve problems like these.

Because I’m not as smart as all the stakeholders, I can’t suggest transcendent solutions to the problems above. All I can say with certainty is that we will not find solutions by fighting to win the right to solve the problems to our own benefit. If two guys fighting over a bag of oranges discover that one wants to make juice while the other wants to use the peels for marmalade, the fight is over. If a couple fighting over what color to paint the kitchen discovers their house is on fire, the fight is over. If two countries fighting over the water in a certain river find water conservation and recovery measures that assure plenty of water for both, the fight is over. But winners focused on winning will make none of these discoveries. Solutions like these can only be found by decent human beings committed not to winning but to solving the problems in a way that satisfies all parties.

The tricky part is that no decent human messiah will rise to the top and teach the rest of us to be decent human beings. We will only live in a decent world surrounded by decent human beings who elect decent human leaders when enough of us have become decent enough to make this happen. We each have to make the choice for ourselves and become the ones we’ve been waiting for. What are the chances? But as my mother used to say, “It’s that or nothing, whichever you like the best.”