Side Event: Protecting Civilians from the Use of Explosive Weapons in Populated Areas

Side Event: Protecting Civilians from the Use of Explosive Weapons in Populated Areas 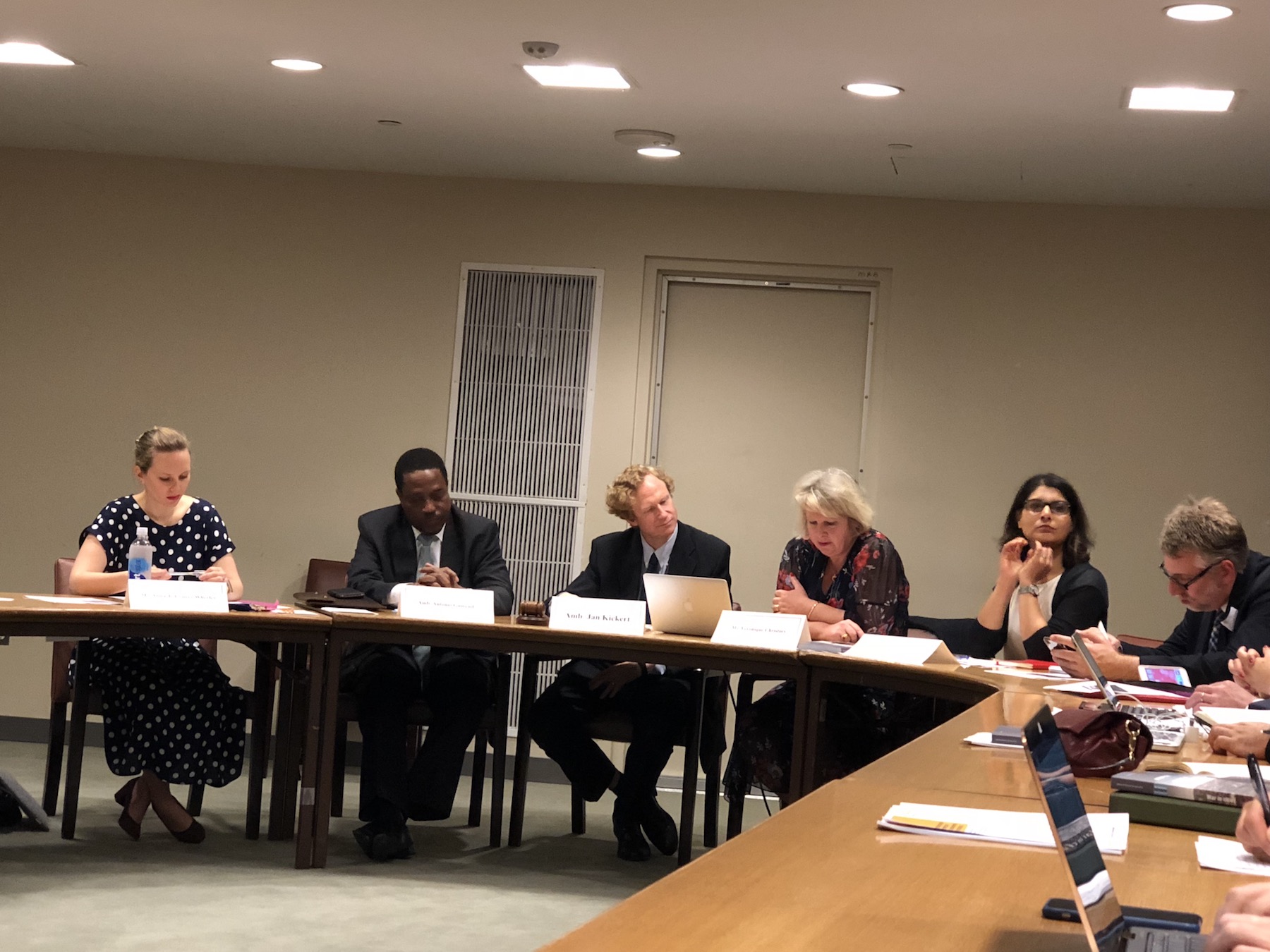 Following the UNSC debate on the protection of civilians, the International Network on Explosive Weapons,Permanent Missions of Austria, Ireland, Mexico, Mozambique hosted a panel discussion on protecting civilians from the effects of explosive weapons. Ambassador Jan Kickert provided the introductory remarks. Ms. Anna de Courcy Wheeler of Article 36; Ms. Veronique Christory of the International Committee of the Red Cross (ICRC); Ambassador Antonia Fumende of Mozambique, and Ms. Sahr Muhammedally, Center for Civilians in Conflict (CIVIC) were the panelists.

Ambassador Kickert of Austria briefed the audience on the severity of civilians being massacred by explosive weapons in urban areas. The indiscriminate nature of the bombing has created a startling humanitarian crisis that must urgently be addressed if there is to be an end to the senseless killings. International law is not implemented in this regard and as a result, innocent lives are lost and no accountability is taken. To stop the targeting of civilians, there must be change in military policy and practice. Implementing these new guidelines will help ensure that urban areas are not targeted and normalize protecting civilians.

Ms. Anna de Courcy Wheeler underscored that the 92% of war casualties being civilians. Unfortunately, this number is expected to worsen if change is not made in how the international community approaches this subject. She further cited that between 60-70 countries experience violence via explosives. For instance, in Mosul, Iraq, 40,000 civilians have been killed as a result of explosives.

Drawing upon her example, one could extrapolate that military culture must change because most harm occurs when militaries choose a target in a heavily populated area. The use of aircraft bombs, IED’s, and rocket propelled grenades are all examples of the bombs used to kill people in urban areas. For those not directly hit by bombs, shrapnel and getting hit with large objects also contribute to the death toll. Under these circumstances, the conditions are ripe for civilians to develop PTSD. As the situation continues to deteriorate, it more important than ever to provide aid and rehabilitation to survivors of the bombings and ensure that aid workers are able to remain in affected areas without fear of indiscriminate targeting.

Ms Veronique Christory of the ICRC gave a vivid description of the environmental and infrastructure damage of urban bombing. She highlighted that this trend is rapidly growing in areas of conflict and has become the new normal in war. The direct effect of indiscriminate bombing is immediate loss of life and infrastructure. However, very little is mentioned about the indirect effects of explosive devices. The indirect effect of bombs are the contaminated water and food, damage to access of vital services, and denial of access to humanitarian aid. Tainted food and water contributes to the spread of serious illnesses  and malnutrition. The increased numbers of sick people is made worse by the lack of infrastructure and medical workers to treat them. These examples of indirect effects illustrate that bombings adversely affect civilians both immediately following the bombing and in the long term as well.

Ambassador Antonia Fumende of Mozambique, made it very clear that his country is very concerned about explosive weapons and referenced the issues they have faced in managing  them. Since most most people live in urban areas, it is of utmost importance that military activities do not take place there. He cited an incident in his country where the improper management of stored weapons resulted in many innocent lives being lost. Unfortunately the bombs at the facility accidentally exploded killed civilians. This cautionary tale proves that explosive devices are serious weapons that must be regulated.

Ms. Sahr Muhammedally of CIVIC offered a solution as to what can be done to fix indiscriminate targeting of civilians. She suggested that civilian and military leadership can help this problem in conjunction with policies, tools, and training. For tools, there should be assessments of civilian harm and a blueprint as to how the info will be analyzed to change policies. Proper training will empower forces to react in different situations, equip them to use appropriate weapons, and know how to react when indirect fire is used. All things considered, weapons manufacturers should be pressed by governments to make better weapons suitable for use in urban areas. Preferably war should occur in non-populated areas because the current explosive devices are designed to for those environments. But since the urbanization of war is growing, policy decisions on explosives must be made to address this trend.