Trump, Kim, and North Korea: Deal or No Deal? 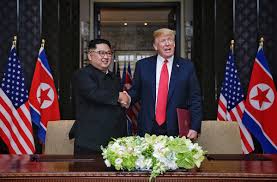 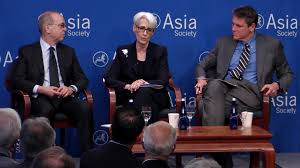 Ambassador Wendy Sherman, Senior Counselor at Albright Stonebridge Group,  Senior Fellow at Harvard Kennedy School's Belfer Center for Science and International Affairs and former Deputy Secretary of State, shared her candid opinion on the 2018 North Korea–United States Summit. She shared the stage with her fellow panelist Daniel Russell, Vice President of Internationals Security and Diplomacy at the Asia Society Policy Institute (ASPI). Their candid thoughts on Trump’s meeting with Kim revealed the summit’s uncertainty for denuclearization and a viable peace process. Additionally, they asserted that the summit’s outcome raised  questions on who was the real “winner” in achieving their goals in advancing their countries interests.

Perspectives about the Kim-Trump Summit

Ambassador Sherman explained that Trump should be weary of Kim’s intentions. Nevertheless, she contended that it made sense this meeting happened, due to Kim understanding that his time in power could be limited if he did not work to unthaw relations with the U.S. and outside world. We have yet to see where this new relationship will go due to the mercurial personalities of the two leaders. The limited information provided to the public was ambiguous and left many questions unanswered.

Unfortunately, the outcome declaration was thin and shared similarities to past declarations. For North Korea, this was a win because throughout coordinating the summit, they were unyielding in compromising details. The North Koreans heavily focused on the “optics of the conference” to ensure that Kim was treated like a peer to the leader of the free world.

Moreover, Sherman explained that the joint statement did not include any sort of verification mechanism or timetable as to when or if denuclearization on the peninsula would happen.

Similar to Ambassador Sherman, Daniel Russel lamented that Kim got everything he wanted out the meeting with Trump. Simply put, the U.S. had no leverage in meeting and Kim appeared to be a master negotiator among the North Korean people. He further contended the outcome of the summit came out in North Korea’s favor, as Kim Jong-Un is able to go home “with his ability to threaten the U.S. intact”. Furthermore, the only thing the US gained from the meeting were the optics of the two leaders meeting and a questionably promise of progress to be made in the future with their new relationship.

Ambassador Sherman explained that Moon Jae-in the, president of South Korea, whose father is from North Korea, pushed for the meeting as he is focused on mending relations with North Korea.  He campaigned on this concept and illustrated his commitment to it as he orchestrated the lighting of the torch ceremony and inclusion of North Korean athletes during the Olympics. China also played a significant role as well due to their guidance in urging North Korea to come to the negotiating table through flexing their economic muscles. They implemented economic sanctions by cutting off petroleum exports, which put maximum pressure on their economy.

Russell proclaimed that Kim has set up separate negations between South Korea, Japan, and China. This threatens our relationships with these countries because it inherently excludes the United States from the negotiating table. Further, it allows Kim to have a better chance of having his demands met with each country. Essentially, Kim has put himself in a good position and possibly laid the groundwork for retaining his nuclear program and being the dominant power in Northeast Asia. Also, it brings him closer to getting sanctions lifted and  improving his countries economy.

Russell mentioned that sanctions do not deter states and individuals from engaging in bad behavior, rather they are designed to bring people to the negotiating table. The ultimate factor in bringing Kim to the table was reaching full nuclear capability and having an ICBM to reach the United States. Since he reached his goal, he is in a position to gamble and negotiate retaining his program and build bilateral relationships with the rest of the world. From this perspective, Kim seems to be victorious in pushing his national interests. Further, it is not clear where the U.S. gained any leverage in the negotiations.

How to build relations with Kim

Daniel Russell mentioned that Kim’s goal was to boost the economy and from the optics of the negotiations, he is on track to do so. This gives Kim the international visibility he wants, and the U.S. should be careful in validating the demands of brutal dictator. Since he is young, this move solidifies his position as a permanent leader. He has proven to the citizens of North Korea that he can push his countries agenda and successfully negotiate with the US.

Since the joint outcome document did not provide a clear path to denuclearization, Russell and Ambassador Sherman offered a blueprint to build a positive relationship and guide to denuclearization. Firstly, the US should begin by inspecting North Korea nuclear facilities and bring in the IAEA. This would be a good faith measure to ensure that they are keeping to their promise. Another problem the U.S. must face is North Korea’s perception of denuclearization.